Superstar Limo was an opening day, dark ride that debuted on February 8, 2001, at Disney California Adventure at the Disneyland Resort in Anaheim.  The attraction was located in the Hollywood Pictures Backlot area.  Superstar Limo wasn’t the original plan for the ride, so let’s dig a bit deeper into the background of the attraction.

In 1991, Disney announced plans to build WestCOT, a west coast version of what was then known as EPCOT Center, on the site of Disneyland’s parking lot. Due to many circumstances and the cost of what that park would cost, Disney scrapped the idea in 1995.

In the summer of 1995, Michael Eisner, Disney’s CEO at the time, gathered company executives in Aspen, Colorado to think of another idea for a second theme park in California. Walt Disney World with its multiple parks proved that California could use a second park.  The executives at that meeting decided the second park in California would be themed to the history and culture of the state.  Disney’s executives aimed to make California a theme park, so as to keep guests at the resort instead of going off-site. Then Disneyland president Paul Pressler relied on merchandising and retail staff instead of Imagineers to design the park. As an adult-oriented park-like Epcot, dining, and shopping were the design focus.

Superstar Limo was originally planned as a high-speed dark ride focused around avoiding the press and crazed fans.

This version would feature a facade based around the Theme Building at the Los Angeles International Airport, which Walt Disney Imagineering had recently helped renovate with “The Encounter” restaurant. From here, Michael Eisner himself would appear on a screen, asking you to get to the big premiere at the Chinese Theater to sign a contract for your next movie. He would also warn you of the paparazzi eager to get a scoop on you, with the ride taking the form of a high-speed chase to get you to the Chinese Theater, which would serve as an unload area and gift shop. After the tragic limo crash death of Princess Diana of Wales in 1997, this concept was seen as being in very poor taste and was halted  before construction was due to begin on January 22, 1998.

Hollywood Pictures Backlot was still needing a major attraction and ideas to duplicate an attraction from Disney MGM Studios were too expensive.  A slower version of Superstar Limo was put into development, putting a greater emphasis on celebrity cameos and Hollywood inside jokes. Interesting!

You probably want to know what the ride was like.  Are you ready for it?  Here we go…..

First, you begin by “arriving” at the baggage claim at the Los Angeles International Airport. A pre-show with a puppet version of Joan Rivers was on a news broadcast, claiming that a new sensation in Hollywood was “going to be a big star.

Shortly after, you boarded your “limo” as the ride began. Your built-in “picturephone” then rang, and you were greeted by your agent, Swifty La Rue (depicted by a hand puppet with live hands), who ordered you to come to Mann’s Chinese Theatre for your movie premiere.

The rest of the ride was a scenic tour of Los Angeles, narrated by your driver (voiced by Corey Burton) while spotting different celebrities on Rodeo Drive, the Sunset Strip, Bel Air, and Malibu. So you may ask yourself, what celebrities will you see on this tour?  Quite a few! 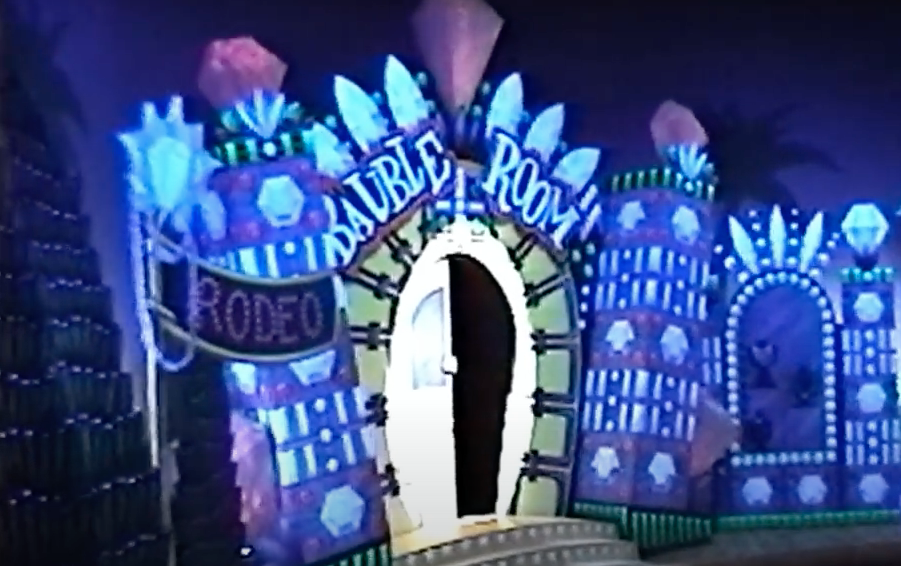 At the end, Whoopi Goldberg at Mann’s Chinese Theatre waiting for your big movie premiere!

Now if you can’t picture the ride, our friend Jeff Lange from Mousesteps.com allowed us to use his video to let everyone see this extinct and interesting ride.

During the development of this version though, a jab at DreamWorks in the form of a studio sign for “DreamJerks” would end up removed.

Additionally, the low budget for the attraction meant that celebrity choices used were limited to those already contracted to Disney or cheap to get the rights for. The idea of Eisner himself greeting guests would be replaced with a new sleazy Hollywood agent character.

When the attraction opened, it was very poorly received and was promptly closed in less than a year on January 11, 2002.

Before being replaced by Monsters, Inc. Mike & Sulley to the Rescue!, at least two overlay concepts were proposed. The first of these was Goofy’s Superstar Limo, which would replace the celebrity cameos with Mickey and Friends and feature over 100 Disney characters. To achieve this goal on a low budget, figures from various Disney Store locations would be utilized to fill out the cast. A second proposal was Miss Piggy’s Superstar Limo, focusing on the Muppets. This version was proposed to have a unique take on installation: The ride would reopen as it was but scattered throughout the attraction would be Muppet construction workers working on new scenes and lambasting Superstar Limo. Over the course of several weeks, Muppet characters would replace the celebrity figures until the attraction was finally completed.

Monsters, Inc. Mike & Sulley to the Rescue! would open in January 2006. To save on installation costs, much of Superstar Limo’s infrastructure and figures were reused. The Los Angeles cityscape facade would be repainted in the style of the opening credits of the film and most of the celebrities were re-dressed as CDA agents (Regis Philbin was redressed as Randall Boggs). Look who Drew Carey became!

If you have ridden Monsters, Inc. Mike & Sulley to the Rescue! It’s a fun ride and really puts you into the movie.  I never rode Superstar Limo, but after seeing videos of the attraction, the track and ride vehicles are the same, just rethemed to match Monstropolis. The best part to me is the end with Roz, because she is “Always Watching”

What are your thoughts on this ride from the past? Certainly something different from what we usually see at Disney indeed!

Scott has 3467 posts and counting. See all posts by Scott

What to Expect from the Jaw-Dropping World of Color – Celebrate!

One thought on “Ride History…. Do You Remember Superstar Limo?”